It's that time of year again. The Film Festival started today. The big gala opening was last night, with Taika Waititi's Eagle vs Shark. Jury's out on this one. Some fun moments, but left me with nothing. I think I was expecting so much more after his quite beautiful short films, Two Cars One Night and Tama Tu. Oh well. Hope he does better next time. The Americans are not saying very nice things about it. Redeeming feature: the soundtrack. I guess mentioning Napoleon Dynamite to Taika might get him a little riled right now.

Tonight I saw A Mighty Heart, Michael Winterbottom's latest (starring Angelina Jolie as Mariane Pearl, wife of murdered journalist, Daniel Pearl), then Head, the Monkees film from 1968. Apparently it was a box office flop at the time. It was really fucking funny. Loved every minute. Here's something I just read: Rumors abound that the title was chosen in case a sequel was made. The advertisements would supposedly have read: "From the people who gave you Head." Now that's funny, huh? I loved the Monkees when I was a kid. Of course, I never got the drug references. I guess they were there in the series - they certainly abound in the film.

A Mighty Heart was pretty affecting – the streets scenes in Karachi, the very believable Jolie as Pearl's wife, the fantastic cast - it all added up to a great film. I missed Road to Guantanamo last year, but have seen plenty of Winterbottom's films before. It was great to follow this with Head. I was feeling a bit emotionally wrung out.

I have three films tomorrow and a meeting at 9 am, so I'd better get to bed.

Oh, and just thought I'd add that Battles are coming. Fucking A, mate! I'm over the moon. 22 September at San Fran. 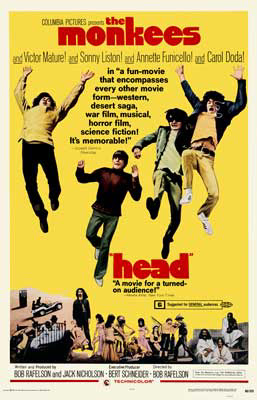 Posted by Rose at 12:45 am
Email ThisBlogThis!Share to TwitterShare to FacebookShare to Pinterest

Is there something wrong wif me,,

'Eagle vs Shark' stayed wif me for days.

I could totally relate to that girl.

Definitly relate to the dysfunctional family,,

Not sure if their redemption in accepting the outsider was totally true. They were sposed to like her honesty and sincerity but in real life I think he was right in saying they would eventually turn against her.

I haven't seen 'one night, two cars' but I am not judging your expectations.

I can se why americans would not be impressed, they're so used to glitz and glamour. They want tattooed faces and Maori criminals.

The girl was so typical of some one who was trying to prove herself with some one she was in love with. she was so the statement of intangible substance Kiwi's can be so ignorant of.
she is the most dangerous because she will jump from obscurity and dominate in a way no one knows.

Above all, she is the reason we had some one like Alex teka commit suicide in Putatruru because of school bullying and why we had an Aririmu back in the 90's. Kiwi's expect others to achieve in our time, not theirs.
If we don't achieve fast enough we're losers and the word potential has also become lost to our vocabulary.

I found it significant the town looked coastal sth island.

Watch the movie again with these aspects in mind and you may well see its message.

I loved it to bits and I think it was so fitting to be a kiwi who had this vision.