Me and the man 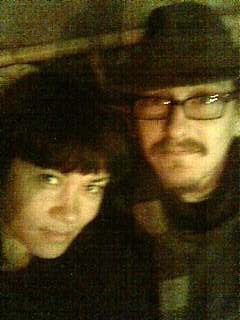 I've just been scrolling through old pics on my phone. I used to have my laptop at work which was very handy - I could bluetooth them across to my laptop straight from my mobile. But without that I'm a bit stuck. I just tried emailing a pic from my phone to my desktop computer, which doesn't have bluetooth. Annoyingly, the images are now only 16k! But usually they are a decent size. Anyway, I thought this was a nice photo of me and Dave. Grainy, but in a good way.

Yes, yes, this is my first blog for a VERY long time. Recently I have been wasting a great deal of time on Facebook. And now I have discovered Twitter, and that’s even worse. They are both rather stupid. They are far too distracting from the work I should be doing.

I think I would rather upkeep my blog. It's far more enjoyable. And not quite as distracting.
Posted by Rose at 1:45 pm
Email ThisBlogThis!Share to TwitterShare to FacebookShare to Pinterest

I'm on both too, but I like the blog world a lot better.