Listening to: Ghosts of the Great Highway, Sun Kil Moon

Just got a nice surprise in the post today: my McSweeney's order. No actual McSweeney's Quarterly Concern yet, but since I subscribed to their package deal, I have the DVD magazine Wholpin and The Believer which this time round is a visual arts edition. Yeeha! Now I just have to find time to read the stuff… 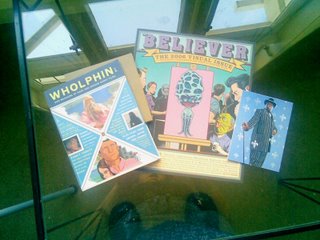 Posted by Rose at 12:14 pm 3 comments:
Email ThisBlogThis!Share to TwitterShare to FacebookShare to Pinterest

We saw this outside a pet shop in Crofton Downs this afternoon. I just had to share. In case you can't tell, it's a very large papier maché flea. Awesome. I want one for my lounge. 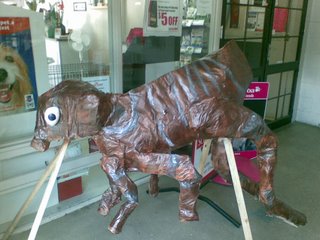 Posted by Rose at 6:53 pm 2 comments:
Email ThisBlogThis!Share to TwitterShare to FacebookShare to Pinterest

These are a few of my favourite things...

Okay, I find the whole "favourite" thing really really hard, because I'm not very loyal to my favourites. I can change my mind about these things way too quickly and today's favourite becomes tomorrow's "oh, yeah, I used to like that quite a lot". But here goes for today.

Favourite movie - Donnie Darko
Okay - very mainstream and all, but I just loved this film and have watched it about three or four times which is very rare for me. It's a great whole package and the soundtrack took me way way back.

Favourite guilty pleasure movie - Nell
Syrupy sentamentalism, yes, but I have memories of watching this movie with my kids. They loved it and I loved watching it with them. It used to make me cry.

Favourite book - A Heartbreaking Work of Staggering Genius by Dave Eggers
Okay, this will change I'm sure. I can't think of any "classic" books that I know and love - there are just so many - so this is my favourite of the moment. I will try and devour anything by Dave Eggers and have just subscribed to McSweeneys.

Favorite guilty pleasure book - Snowflake by Paul Gallico
A book from my childhood that I pick up again every now and then. See the sentimental seam running here? Scary. I also love the cover. It's a slim little hardback novel.

Favourite song - "A Pillow of Winds" by Pink Floyd
Just a really beautiful love song. Makes me close my eyes and smile. Meddle is one of those albums that my big brothers listened to when I was about 11 or 12 and I loved it and listened to it so many times and still can. It reminds me of laying around on a summer's day in our lounge on the cusions in the bay window in the hot sun with the breeze blowing in... But a very close second is The Chills' "Pink Frost".

Favorite guilty pleasure song - Afternoon Delight by The Starland Vocal Band
I can still listen to this song and sing away - know all the words. But only in private. This one's just plain embarassing. I can't believe I'm 'fessing up.

Hey, this was fun! Cheers Paintergirl!
Posted by Rose at 1:43 pm 1 comment:
Email ThisBlogThis!Share to TwitterShare to FacebookShare to Pinterest

Listening to: Cat Stevens, Teaser and the Firecat

Paintergirl was doing an interesting exercise in nostalgia, taking a trip down the olfactory memory lane by recounting the perfumes she has worn over the years. I could immediately remember the scents I've worn over the years. My latest perfume was not even chosen by the scent but by the concept - I read about it in a magazine and thought "yep, that's for me". Good grief, don't I sound like the most despicable consumer. Anyway, here's the description of the scent. I've been wearing it ever since and have to send away for the stuff since I can't buy it anywhere in NZ.

Odeur 71 by Comme des Garçons
Stray from the traditional and opt for the extraordinary. This bold "anti-perfume" combines 71 modern and classic "odeurs" to yield a unique and provocative fragrance for men and women. This ultraurban scent spins together the cloned inorganic smells of modern daily life and mixes them with natural ingredients for a futuristic fragrance.
Moss, Bamboo, Bay Leaf, Willow, Elm and Birch, with Photocopy Toner, Dust on a Lightbulb, Electric Toaster and Ink.
A cool, contemporary scent for the modern man and woman.

Anti-perfume? Where the hell do they come up with this stuff?
Posted by Rose at 11:36 pm 2 comments:
Email ThisBlogThis!Share to TwitterShare to FacebookShare to Pinterest

Gonna be an office girl

A friend of mine asked me last week if I'd be interested in sharing some office space. I went and checked it out and it's absolutely perfect. It's pretty lonely with just me and the kids, and even though it means I'll have to fork out some more money, I think it's worth it so I've signed up. Very exciting. It's in exactly the right part of town for me and is very handy to the Film Festival where I'll be working again this year. Yes, I know I said last year that I was giving it up, but I will need the money and really, I do enjoy it, even though the hours are stupidly excessive. I'm moving at the end of the month. I'll post some piccies when I get myself installed. Me and two friends who are web designers will be sub-leasing from a small film production company, so it'll be a whole floor of creatives. And there's even a shower there! Really looking forward to it.

I've been motivated enough lately to manage twice-weekly gym sessions. I'm not the gym type at all, but I know it's the only way I'll get any excercise and I really want to look after myself this year - lose some weight, get fit, eat healthily. Doing well so far...

I've been to see a few films lately. I saw The Valet last night. Fun French comedy. Pretty light, but entertaining. My fave film so far this year (although I haven't seen many) would have to be Sofia Coppola's latest, Marie Antoinette. A flirty frothy piece of girly bliss. Totally lightweight, but so gorgeous. I loved it. And then there's the soundtrack - I got home and downloaded immediately, and it's been on heavy rotation in my car. After listening to 'Hong Kong Garden' by Siouxsie Sioux, I will be no doubt revisiting some of her albums for more than nostalgia's sake. I forgot what an entrancing voice she has.

During some of my Soulseek downloads this week, I found a stash of images. Amongst them was a folder full of images of old Russian posters. The designs are so cool, I just had to share one. 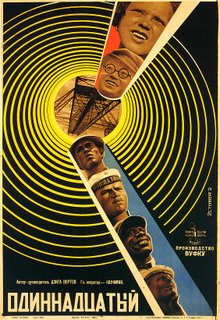 Posted by Rose at 7:41 pm 3 comments:
Email ThisBlogThis!Share to TwitterShare to FacebookShare to Pinterest

I've been really into looking after myself lately. Weekly massages (including some nice healing reiki); eating properly (no sugar - well almost!); taking B vitamin complex, antioxidants, and four times a day a quite disgusting herbal concoction that tastes worse than it smells (and it smells pretty foul). This herbal mix is what is really keeping me going. Among other things it contains a good belt of valerian (nature's very own valium!). It's non-addictive and helps you sleep. During the day, it just helps me deal with the jittery body stuff that comes with grief and loss - a form of anxiety I guess. So really, I think I'm doing bloody well, all things considered.

Today I'm off to see a well regarded homeopath to get a constitutional remedy. More on this later. It'll be interesting to see how this goes. I envisage I will have a large list of questions to answer about my bodily functions and general health.

Work is going well, although there is an awful lot of it. I'm enjoying my work though. Very busy. It's good!
Posted by Rose at 9:13 am 3 comments:
Email ThisBlogThis!Share to TwitterShare to FacebookShare to Pinterest

M. Ward is a Guitar God

Wahaaay. Just got back from seeing M. Ward. What a fucking treat. The place was packed. The man was amazing. And I managed to spend the entire gig just two from the front (even though my feet were killing me). It was a pleasure just to watch this guy play, let alone listen to his poignant guitar and beautiful voice. His own songs were brilliant, but it was pretty damned cool to hear his version of Daniel Johnston's "Story of an Artist" (off the Discovered Covered tribute album) and David Bowie's "Let's Dance" (who knew it was such a touching love song till they heard M. Ward sing it?). The best bit was his cool trick with his loop pedal. He was playing solo and you'd suddenly realise that he was looping what he had just played and adding new guitar over the top. At one stage he had two loops of his acoustic guitar going and then played some electric riffs over the top of that. All done seamlessly. Wow. He was so impressive.

Okay, guess it's about bedtime, being 1.30 am with work waiting in the morning. Still, I have a nice massage booked for the afternoon. That's something to look forward to.

Now I have to decide if I'm gonna go see The Veils on Saturday night. And coming soon are Calexico and Joanna Newsom (playing with Smog). Too much!
Posted by Rose at 1:18 am 2 comments:
Email ThisBlogThis!Share to TwitterShare to FacebookShare to Pinterest

It seems that I'm starting to pick up the pieces now, thankfully. I've been getting out and about. Went to see Cansei de ser Sexy the other night, which was a lot of fun. I actually went with my 19-year-old son! How sweet is that. So So Modern were the perfect support band. They are one of the best things on the Wellington band scene as far as I'm concerned. I bumped into a guy I haven't seen for 12 years! That was way cool. He was a close friend and we had completely lost touch. Bit of a surprise. He hasn't changed a bit.

I went to see Babel last week. Definitely worth seeing. I've really been seeing so many movies lately. It's a good way to keep my mind off other things, but of course, it's always great to get along to the movies. I'm heading along to Marie Antoinette tomorrow night.

I'm somehow managing to get through my work. I really am still quite behind, but I think I can wing it somehow.

I'm still feeling like I have a bit hole in my life, but I'm feeling stronger every day. Life goes on. It has to.
Posted by Rose at 8:43 am 3 comments:
Email ThisBlogThis!Share to TwitterShare to FacebookShare to Pinterest

new blog. should i bother?

I can't quite bring myself to make the effort to start a new blog. Even just thinking of a new name seems like a lot of work. I'm not quite managing to keep up with the work I have to get done at the moment. It tends to be interspersed with little crying breaks. It's very annoying. I want to get back to being "me" again - getting on with things - but it's hard going. I guess I have to be patient with this grieving process. It's not easy getting over the shock of a sudden unexpected split. So many questions. So much pain. My kids are amazing to have around. We've been getting along to see movies, or going out for something to eat (having been feeling like cooking much either. Just been to see The Queen, which I enjoyed (surprisingly!) and The Departed (Scorcese's latest), which was also very good.

So, a new blog is not imminent. This one will just have to continue I guess until I have a bit more energy.
Posted by Rose at 9:23 am 4 comments:
Email ThisBlogThis!Share to TwitterShare to FacebookShare to Pinterest
Newer Posts Older Posts Home
Subscribe to: Posts (Atom)
At Home With Rose is a podcast of fucking good music. Broadcasts fortnightly on Sunday afternoons on Audio Foundation Radio.