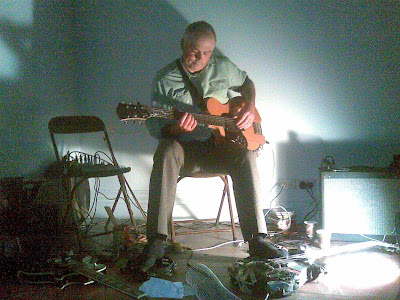 Tonight we went to the White Fungus Relocation Party (Ron and Mark are off to Taiwan and publishing White Fungus from there). As part of the celebrations, Greg Malcolm made his way up from Christchurch for a one-off performance. I've seen Greg play twice before and really enjoyed his music and his warm-humoured delivery. There's a real playfulness with Greg's music, and none of the serious earnestness that can be kinda annoying with sound artists. It's pretty obvious that he spends a lot of time experimenting with sound. He brings out so many odd items to connect to his guitar in some way (dangling off it, rubbed against it, banging directly onto it) you wonder what he's gonna pull out next. While he strums sweet melodies on his guitar (an amazingly beautiful instrument) his toes are used on two guitars laid flat on the ground in front of him. It's great to watch. I loved it when he laid a marble on the strings of one of the prostate guitars and tipped it gently back and forth, resulting in a sliding drone.

The only downer of the night were the many people creating an irritating drone of their own. I do wonder why people come to performances when all they want to do is chat to their friends. It shows little respect for the artist. We noticed that Greg pumped the volume up quite suddenly at one stage and I picked up a tiny lift of a smile as he did so. Quite right, Greg. But he shouldn't have had to do that.

Because of the perfomance tonight, I've decided that my next show is going to be a Greg Malcolm special. I love his stuff. He's been included on my playlist before. I've been thinking about having single artist shows, so this is the first of those. I'm looking forward to putting it together tomorrow night.